I always see some variation of this idea even way back in 2006.

I think its high-time we finally had a discussion on GrangerHub on why this comes up. What are “graphics”? Why do we need them to be improved in Tremulous? What does it take to make “good” graphics? Should we focus on them? Are they based on style or whats available in the renderer? Etc.

I highly suggest that before you reply with your own thoughts, to read Valve’s PDF on how they designed Team Fortress 2’s visuals to serve it’s gameplay:

Hendrich’s point is that before we improve the graphics of Tremulous, we need to define what it means to have better graphics for Tremulous. Simply making Trem’s graphics look more “realistic” may not only be unecessary, but actually get in the way of the game play. Game play should be our number one priority in the next version of trem (besides also having a client & a server that is non buggy and efficient to download/install/setup/use). So when we improvement of the graphics of trem should be done with the aim to add to the gameplay, or should not be done at all.

I’m against realistic style graphics. Take a look at Unvanquished. Looks so jerky and stiff, it’s like the human ice skating effect is very significant compared to in tremulous, and is comparable to the bricked character animations in Uberstrike (Don’t play this game, it’s a rip-off pay-to-win).
Alien feet also are small, animations need to be super fast.
I’ve tried modifying the human walk and run animation to synchronise with their default running/walk speed at g_speed = 320 ups and if you ask me, it’s like a toddler running around with their super fast legs. But not that bad.
But if you applied similar things to something like well, the Marauder, the Marauder’s animation would seem soo fast it doesn’t even look “efficient” since the leg movement arc isn’t that much.

We could try HD-models however who is going to take that effort?
We could try HD-character textures, sure, fine. Some people can do that easily by doubling the texture map resolution and adding noise to it.
But sounds, we better not fall into the same scenario that Tremulous 1.2 went in.\

Take a look at Unvanquished. Looks so jerky and stiff

My problem with this statement is that Unvanquished has made it clear that its in early alpha and most of it’s visual assets are subject to major overhauls at any time. I’ll reserve judgement on what Unvanquished artstyle is aiming for when the developers themselves nail down a concrete vision.

It’s important to explain what “realistic” means so we can better understand what this actually means and not confuse it with “unrealistic” artstyles. I think it would be helpful if you explained this term in your own words.

To me, “realisim” is when the art imitates (to the best of the developer’s ability) objects, maps, lighting and animations (etc) that we could see behave in the real world. I use “imitate” loosely because despite many games trying to push polygon counts and fancy rendering effects to make games look “realistic”, instead artists still employ stylistic techniques to make the game look “better” over trying to make it “photorealistic”. Example: 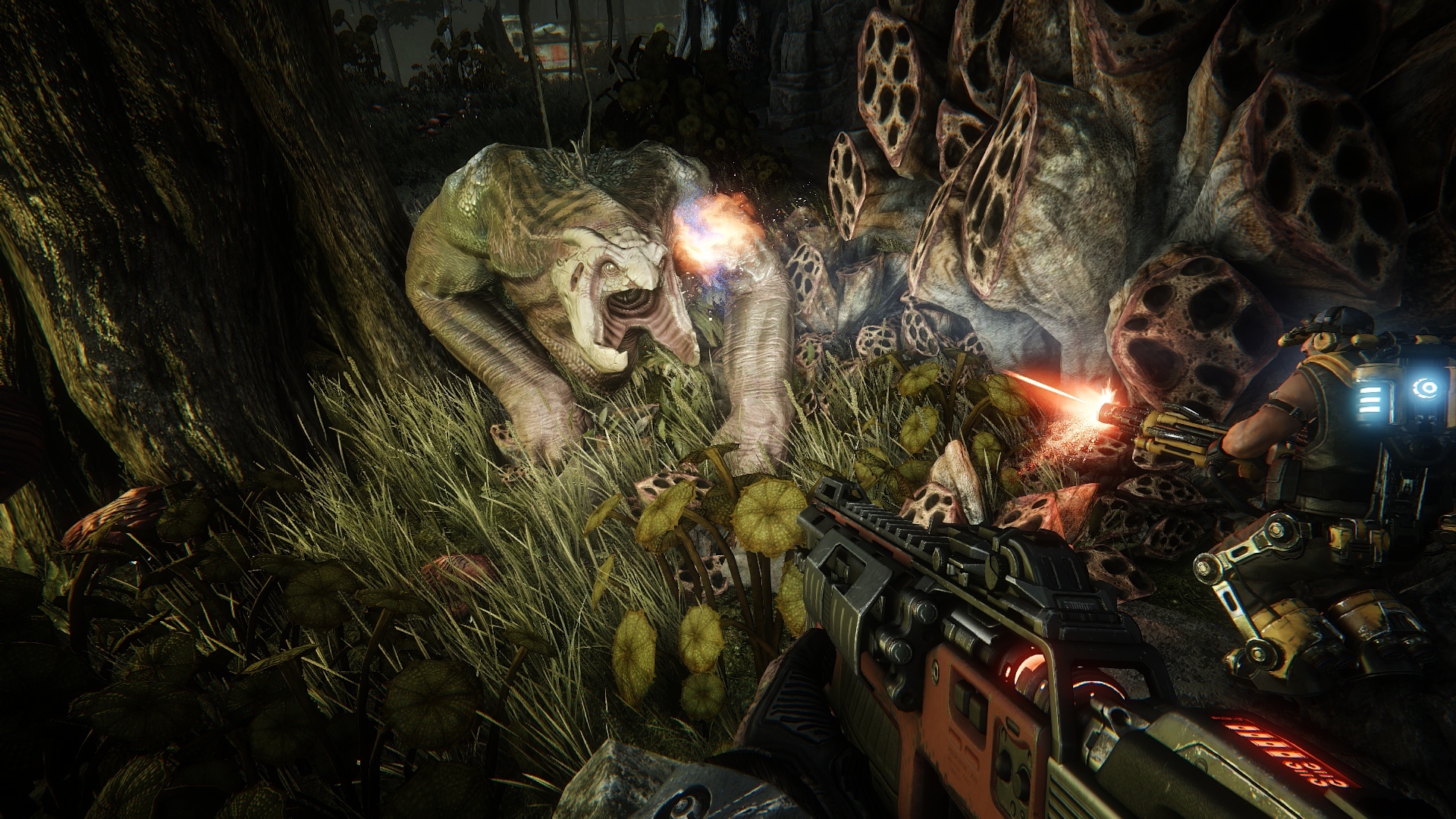 I think alot of people would look at this screenshot of Evolve (Alien team/survival FPS) and say it has a “realistic” artstyle, but we need to ask ourselves if this is truly the case. The lighting is certainly impressive and does try to behave like actual illumination, as well as the reaction it has against the Alien’s skin. However, noone would look at this and be tricked for even a second that this is “real” because if we look at the finer details, we see that the textures have a “painterly” look to them. The guns are oddly reflective, the grass seems flat, the right-sided alien vegetation use smart use of textures to give the impression that they have holes inside of them, chromatic aberration and haze are used in ways they would never appear in real life, you can see the proportions of the models are exaggerated, etc. There are things in this image that are clearly both stylized and “realistic” and the game tries to make good use of both in tandem so that the image you see would look impressive for a AAA shooter in 2015.

One lets you get away with exaggerating models, gunfire, lighting, etc while trying to maintain some ground in how those visuals would react against more natural lightsouces, models, sprites, etc. “Realistic” artstyle would demand that despite the limitations of your renderer, art skills, time, etc you try to imitate the real world as best as you possibly can. A good example of this is Arma 3:

To summarize my whole spiel, my argument is this: artstyle can be nuanced and we don’t have to commit to making Tremulous only look “realistic” or “cartoony”. We can still have a game with realistic lighting, weighty animations and all the rendering whistles we want, but still have exaggerated models and stylized textures that will still look good even with all the settings cranked down.

We just gotta decide what exactly thats going to look like. One point you brought up is something I’d agree with:

I’ve tried modifying the human walk and run animation to synchronise with their default running/walk speed at g_speed = 320 ups and if you ask me, it’s like a toddler running around with their super fast legs. But not that bad.

ie. We’re going to need competent artists who are willing to balance issues like these out with the programmers.

We could try HD-models however who is going to take that effort?

Well to be honest I like our current sarge model body proportions. Not quite cartoony but not quite realistic.