Trying to get into gpub. I get kicked out to main screen with this error. It’s happened in the past and I just restarted trem and was fine. Now I get kicked out everytime I restart trem and reboot the computer. Bleh 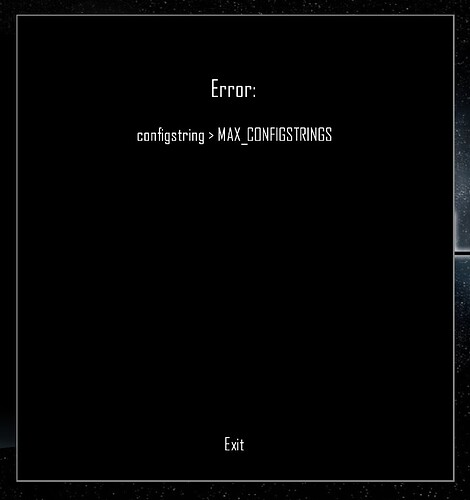 it happens sometimes
don’t know why

It is a bug with the server, we sorta have a “fix” on test7341 for it (happens way less often on test7341), but that “fix” kinda screws with how dependencies work, and max config strings does still happen sometimes on test7341, but it might be worth updating pub with that anyways for now. The “real fix” has yet to determined.

A combination of the following can trigger the max configstrings bug:

ok thanks spark. rebooted again and was able to get in.

most of the time on GrangerPub when it occurs there is a lot of players online and the given map has more bp than the server default so a lot of buildables are built. Max configstrings doesn’t affect players who are already on the server. So you usually can get back in either when enough buildables are killed, or enough players leave, or the next map starts.

So “max_configstrings” is really for determine how server of capacity was calculated, or other functions as well?

We are still uncertain of what is the root of the issue, I only know what can trigger it. I do know that the actual number of configstrings remain under the max.

still uncertain of what is the root of the issue

why this didn’t happen on the old W server? (bpunlimited)

It is a bug in the new tremded.

It is a bug in the new tremded.

Maybe I can fix it… can I have to code, please? Or someone else is already fixing it?

Maybe I can fix it… can I have to code, please? Or someone else is already fixing it?

The relevant code for this bug is private at the moment, but it is planned to be publicly available with the pre-release. I can’t give a hard date at this time on when the pre-release will occur, but we are working towards having it as soon as possible. In the meantime, we do have a less than perfect work around on test7341 where max config strings occurs way less, that maybe we should look into applying to the tremded on GrangerPub/GrangerClub.