The shit that I’ve been working on lately, in case you haven’t seen me on often lately (well other than the particle system registration bug i have on gclub). Yes, NS2 is a commercial paid game. Search around for keys and you’ll probably get them for free, though I personally got the game from Maro, a fellow KoR member (<3). NS2 Combat is a separate game whose developement team doesn’t get paid and have been treated like shit from UWE apparently, so don’t buy that game, if you want it, well, it’s more dead than unvanquished and you can get the keys if you ask politely on their discord.

Anyway back to NS2, I’ve logged about 500 total hours in this game, 150 of which are developing this so-called ‘tremns2’ mod, which aims to get the tremulous feeling into their slow-as-shit game (takes like a minute to walk from one side to the other side of the map, and like 3 minutes to destroy the enemy command unit): 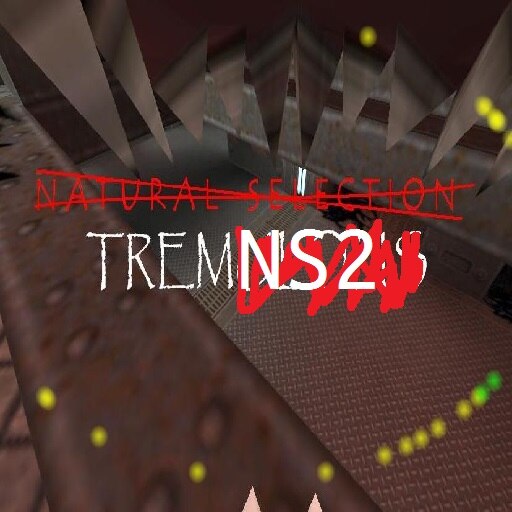 The game engine is programmed in lua. There’s lots of dodgy shit like declaring a global variable, then defining a local variable as it and then not even adjusting the local variable (pointless memory usage) and other shit. Tremulous source code is much much more neater and logical too. On the plus side, you can (supposidly) edit a source file and see the result in live time, though that isn’t really the case since it’s quite buggy. However it is true for the spark map editor where lights aren’t baked onto the map and are rednered in real time (see most bottom link).

Anyway this is what it looks like, with my newly made knockback function: 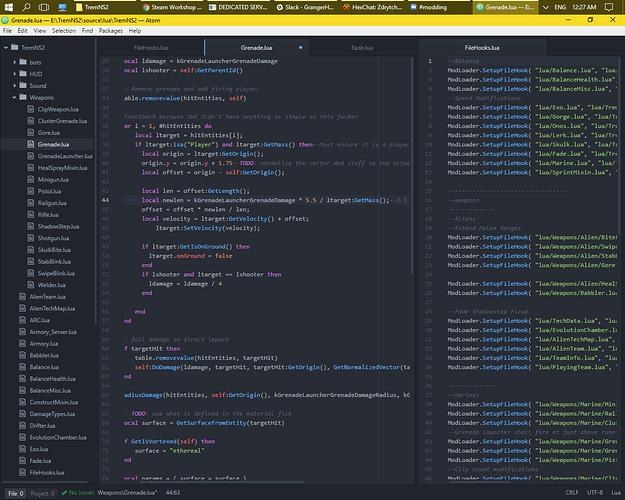 Pasted image1280×1024 203 KB
Their game engine is so primitive that they don’t even have water physics, knockback function, or even a simple thing such as being able to scroll the console for past entries!

Recently sparky and a few others have been poking me to get back on slack so I was like why not, let’s just install this shit and:

Unrelated but sort of on topic:
Feel free to boast about this biased google search stats: https://www.reddit.com/r/ns2/comments/5hi4jr/tremulous_vs_natural_selection_2_web_search/

And see how mapping is done on the spark engine - ATCS if you are interested (fuckload of map editor bugs, plz, i gave up on this shit for now): http://steamcommunity.com/sharedfiles/filedetails/?id=810328380

So is this basically Tremulous, but the Human team has to deal with a fucktard peruvian commander who doesn’t speak God’s tongue and drops medkits across the map for his butt-buddies on Discord? Because thats essentially a nerf and I’m totally fine with that.

Otherwise I’m trying to say: What does this modification exactly do?

Transitions ns2 into tremulous-alike gameplay. It’s taking a while since I never read more than 1 sentance from a lua tutorial

There are a lot of changes to list out though the main ones are basically:

PvP combat specifically, marines start with 0 armour and at stage 3 armour they have 117 armour (total equivalent health is 334 health, results in 4hp after hit twice from 160 damage swipes)

Rifle → 30x5damage
Shotgun: 8x56 damage (11 pellets, 4 damage each, reduced spread due to difficulty hitting lerks and fades with their realistic hitbox sizes
HMG → Pulse rifle - 135 shots, 7 damage each or so, which results in approximately the same DPS and total damage per clip as prifle from 1.1
Flamer → Short range equivalent to 1.1 distance since gpp distance was OP, 2 x 150 clip sizes, 100 DPS like trem.
Grenade Launcher → Luci. Explodes on contact with anything, and has knockback (just finished coding about 5 hours ago or so)
Welder → 200 DPS, short range and 0.1m thick range like 1.1.
All weapon upgrades except welder adds on 160 credits to account for the lack of ability to purchase armour.

Gamerule changes are basically:
-200 credits = 1 frag / 1 kill equivalent although rewards are adjusted accordingly to tremulous’ definitions. I might wantto reduce it back down to 100 / 1 frag equiavlent though because its impossible to tell if you killed the enemy with a turret or not and commanders earn too much that way.
Resouce rate is synced to 2 res towers = 180 c / 2 minutes like 1.1/gpp vanilla rules before suddendeath

And a lot of othe rstuff adjusted to tremulous values.

think about using it as a marketing for trem

Look at the description of the steam workshop item

Why do you want to introduce that old Tremulous bug to NS2?

The closest thing they have to hovels are gorge tunnels. There are also anti-wallwalk surfaces available i can use for the skybox. I actually have no idea how to apply them at the moment, so far i just need to recreate the map itself without any textures whatsoevver for now, that stuff can go later. 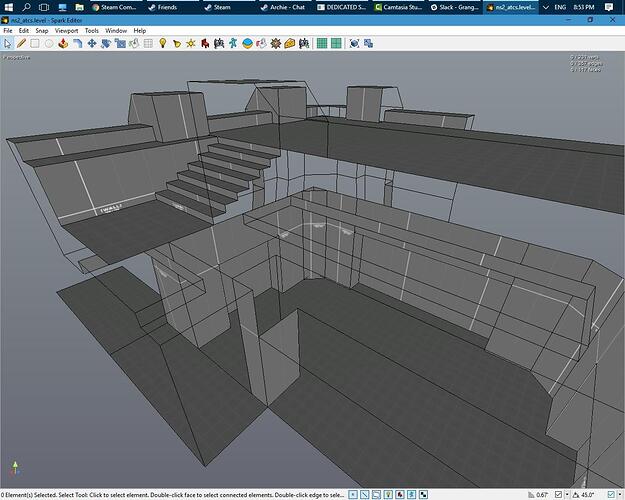 atcs-bunker.jpg1280×1024 134 KB
Also the map editor is bloody annoying so i actually haven’t done much work in the re-recreation.

Took me like two hours to patch up one wall and fill in the flat surface next to the stairs in the screenshot above because its buggy. UWE has no plans to fix their map editor shit anytime soon.

I copy-pasted itself over the old backup i had from the corrupted remake version. This is what I got: 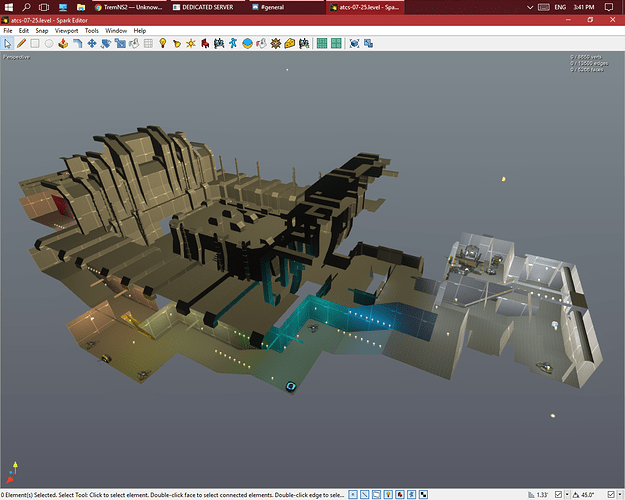 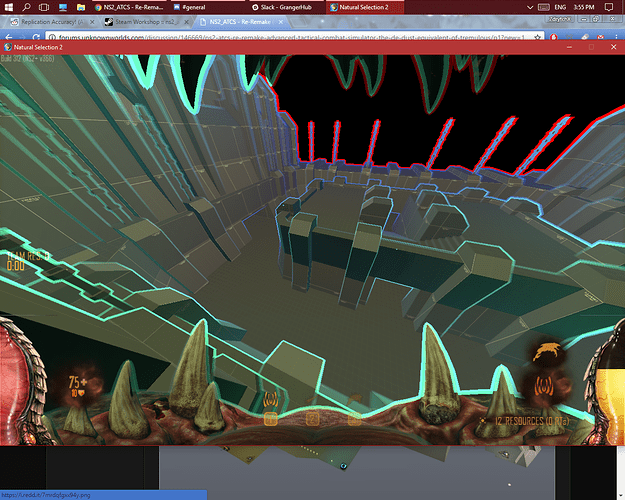 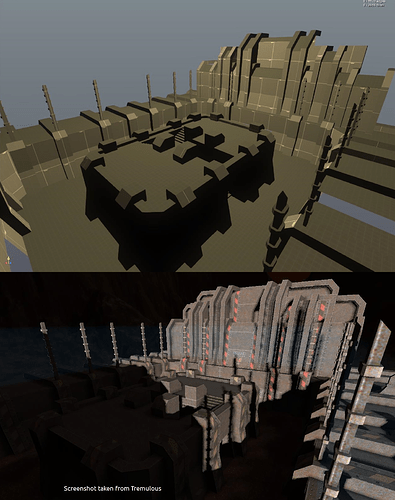 The mod is now on github. For those new to lua, you may want to skim through them to get the basics of lua functions. And yes, it’s messy because the spark engine is a mess. 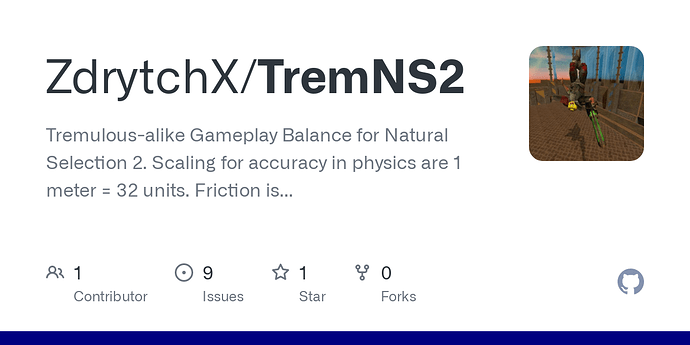 Tremulous-alike Gameplay Balance for Natural Selection 2. Scaling for accuracy in physics are 1 meter = 32 units. Friction is not accurate due to limitations of the game engine but I will try again...