Just going to leave this here 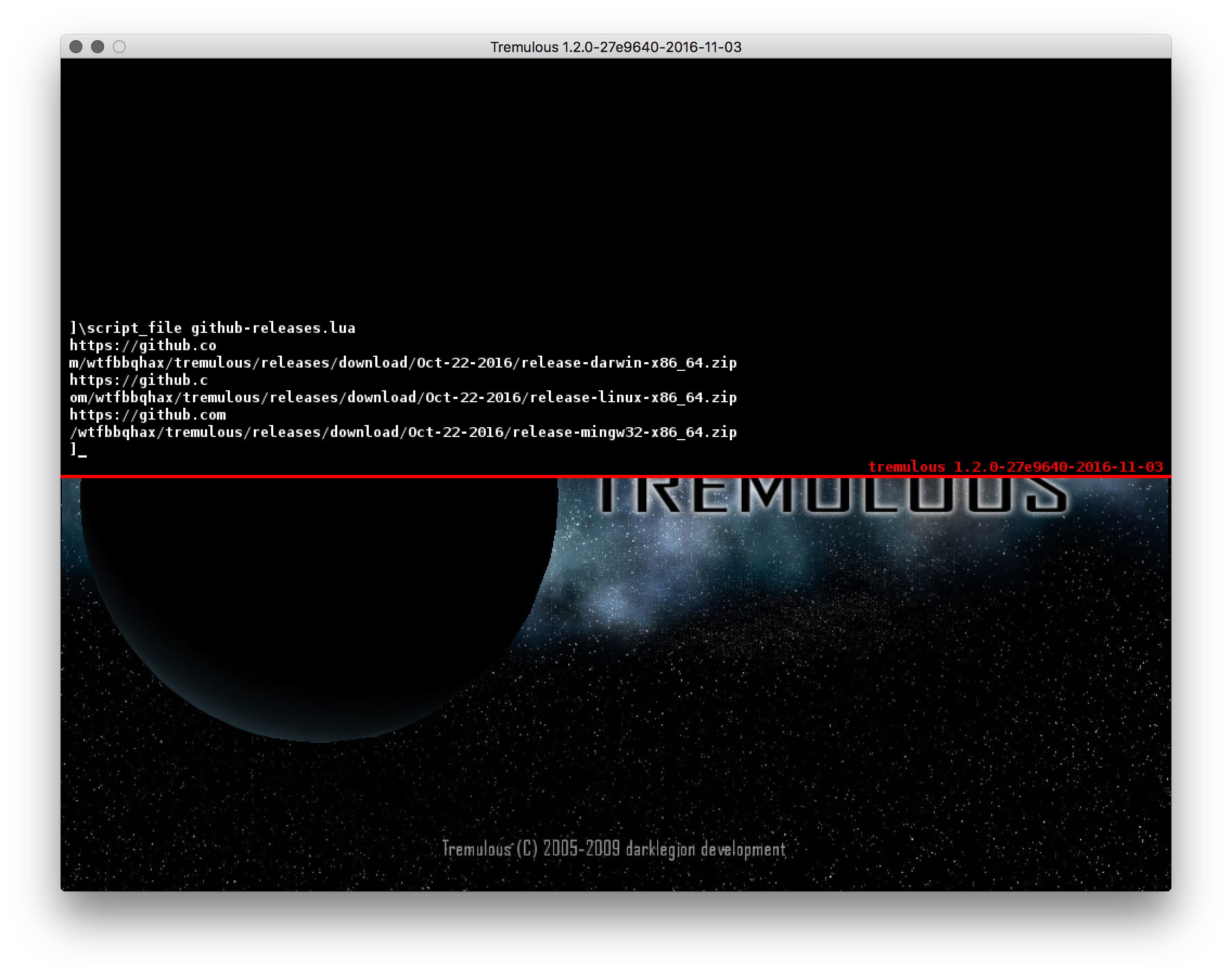 Is that a new mod for Tremulous?

I am no programmer, but based on what I can read from BlowFish’s OP:

This sample demonstrates how to comunicate with an HTTP JSON 3rdparty
API in Lua script.

It appears to me that the LUA programming language is being demonstrated within the Tremulous (1.3?) client itself. I assume this is a mostly developer thing to be excited about, as people can eventually make COOL SHIT™ using LUA.

Though I think if we ask @blowFish politely, he might give us a proper explanation.

Lua runtime is embedded in both Tremulous client and server executables. Largely this implementation allows for in-console scripting and loading scripts from disk. There is a growing API provided to Lua, 2 of these are HTTP and JSON; These make interacting with 3rd party API’s trivial.

You could write a Lua script for your server to log in game chat to a slack channel.

Control Spotify in your client; or publish radio stations from a server.

Another thing you can do is write/run Lua scripts from within your client’s console, for hopefully non-malicious uses

Lua support is already available on @blowFish 's public repo, and will be included in GrangerHub’s pre-release client (and subsequently in the 1.3 initial release).

Some other things that potentially can be done with Lua integration with Trem (although these following things are not planned for the 1.3 initial release) is Lua scripting for maps, Lua scripting supplements/complements to the game logic, or even completely replacing some or all of the kinds of QVMs with Lua scripts (the ioquake3 engine has 3 types of QVMs: game QVM used by the server, and the cgame & ui QVMs used by the client).

Lua (/ˈluːə/ LOO-ə; from Portuguese: lua [ˈlu.(w)ɐ] meaning moon) is a lightweight, high-level, multi-paradigm programming language designed primarily for embedded use in applications. Lua is cross-platform, since the interpreter of compiled bytecode is written in ANSI C, and Lua has a relatively simple C API to embed it into applications. Lua was originally designed in 1993 as a language for extending software applications to meet the increasing demand for customization at the time. It provid...

We will probably have support for Lua defined game logic by 1.3 release. We just won’t be using it in the 1.3 release.

spring makes heavy use of lua in a interesting way.
Im really looking foward to scripting support in trem, this will be awesome to say the least.