Tyrants are too strong

What do you think about Tyrant class? IMHO is really too OP. So I suggest to change a bit his impact in this game, lowering its maximum health to 300 from 400. Coz it’s too tanky and can alone destroy a whole base. Another way is to increase the kill reward to 1200 from 800.
Maybe the last one is more handly than the first one. What do you think?[poll]

Perhaps some fundamental questions about the Tyrant should be answered first:

What basic purpose is the Tyrant suppose to serve?

I concur. Dretches/Basilisks/Mauraders (and to a lesser extent vanilla dragoons) are not the popular choice at S3, for a good reason. Their effectiveness in their roles drop off once humans get access to Bsuits.

Tyrants are tanker, easier to play (relative to every other class) while being able to defend and take down well-protected human encampments. In exchange for their lack of vertical movement, Tyrants basically do a better job except for long-range sniping (ADV Dragoons).

IMO, They are a little OP. I think the evo’s for a rant should increase from 5 to 7. Whenever there is over 5 rants at once camping outside human base the game gets a little boring tbh. Maybe you could have pressure points on the rant to decrease its health faster, for example if you shoot the head the health damage would be 1.3x more or so etc…

What basic purpose is the Tyrant suppose to serve?

IMHO it’s used to tank the damage and destroy the enemy lines with the effectiveness of a panzer. Is also usefull for heal regen. If the humans camps a tyrant rush can win the game.

What impact would that purpose have on the game play?

Increase the kill reward to 1200 from 800 will helps humans to recover their finances. There were more shotgun-elmets more chainsuits and lcannons. The game will be more dynamic and the humans can finally win a late game. (sometimes happens already but more than 70% of the late game are dominate by tyrants)

Is that impact a good thing?

If it is played correctly by both parties the Tyrant is unkillable in 1vs1.

yet another proposal of the „flying tyrant” kind: often repeated with nothing learned. see the tremulous.net forum for previous discussions of „X is too strong”, including proposals and decries.

often repeated with nothing learned

Just in case noone actually takes the effort to do so, here’s one from 2011:

I had already read

And I still thinking that rant need a balance. Can we make a “poll vote” for this?

Can we make a “poll vote” for this?

You can modify your original post to include a poll by doing this: 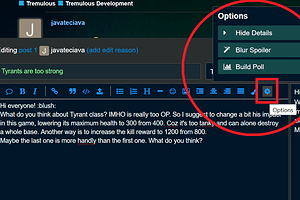 Holy crap guys. After all those years you cant kill a fucking rant? Plz…

You can implement anything you want in 1.3 but leave 1.1 alone. In 1.3 you will get your weak tyrant.

Wondering after 10 years of the officially release why do you have problem with the rant now? Never saw such a cry babies before. I came back to play and everybody is crying about rants. Man up! You have a fucking team. Communicate and take it or them down. Its a team game anyway. Communication is the key if you arent good enough to handle it alone.

I’ll have to teach many of these people to kill rants alone. So they can become great legends that have played for 10 years like me. Yes my ego is so big muahauh

LOL. Okey I shouldnt check forum. This is funny

In b4 you recruit javateciava for NoS.

You can implement anything you want in 1.3 but leave 1.1 alone. In 1.3 you will get your weak tyrant.

Keep in mind that 1.3 will have three game modes (Vanilla, Swirl, & Chocolate). Since Vanilla will be the port of the 1.1 vanilla game play, the rants should work very close to (if not exactly) the same way as in 1.1 vanilla game play. But for Swirl Game Mode (that is the new game mode), we might change the rant, or even replace/remove it and change other features to compensate.

So this is a discussion that can have value.

do you know that the “game style” change over time? Is called “meta”. ATM the meta is “camp & rants”. Once use tyrants when you don’t need them was considered a idiotic behavior like camp. Now no. So we have to adapt. IMHO discourage these behaviors will lead to an improvement of the game.

In 1.3 you will get your weak tyrant.

I don’t want a weak tyrant rather a balance of his reward which isn’t adequate with the cost of the weapons needed to fight rants.

It’s not just killing the rant, you have to invest so much into killing them you lose map pressure and do zero damage to buildables because they block everything. It takes a shotgun 8 seconds to kill a tyrant solo assuming you land every shot. If 4 rants cylce efficiently they can be essentially immortal vs anything besides a luci. Humans have ammo constraints and soaking 1.2k damage by encountering 3 rants on your way to alien base (even if you kill them) means you have little left to take out structures and defend yourself. 2 rants have more HP than an overmind and heal twice as fast just FYI. I think it takes 3 battle suits to have the EHP of the reactor.

@ckit , In an ideal game play, what would you recommend should be done regarding the rant? Should the rants be modified, if so, in what way(s)? Should the rant be completely replaced/removed, if so, what should change (if anything) to account for the absence of rants?

If you are fighting truck maybe, but what about blizz.

I still wreck because I’m above all . I rekt euros back then